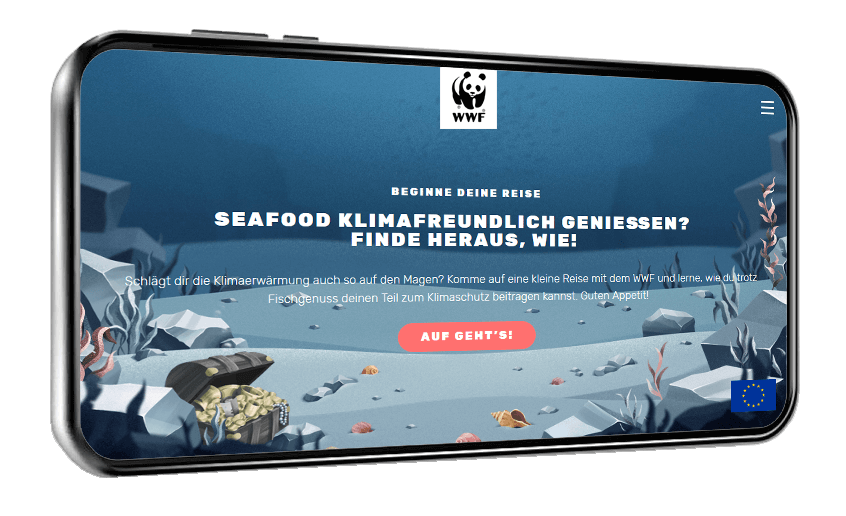 Vienna, 30.10.2019 – The elaborately designed campaign takes users on a playful journey through the various stages of fish production. Depending on which decisions the player makes, different CO2 emissions and effects on the climate occur. The aim is to raise awareness of the consequences of chewing decisions.

The EU is the world’s largest importer of fish and seafood. Since the large consumer demand cannot be met by fishing or aquaculture in Europe, more than half of the demand is imported – with the corresponding impact of production and transport on climate. In order to inform consumers about the effects of their purchasing decisions and to create an awareness for sustainable fish consumption, WWF Austria, together with the digital creative agency TUNNEL23, is launching a Europe-wide online campaign, which will be implemented in a total of 11 countries.

From Ocean to Domestic Plate: Playful in the Fight against  CO2 Emissions

The heart of the online campaign is the interactive website designed and implemented by TUNNEL23. With its lovingly designed illustrations, the site takes users on a journey through the various stages of fish production. In the course of the game, users have the choice of different fish species, catch and transport methods. After each decision, the tool calculates how much CO2 emissions the chosen production route produces. This gives consumers an insight as to how their buying habits affect the environment. At the end of the virtual journey, the total CO2 emissions are calculated and converted into car kilometres, which makes the result even more tangible. The result can then be shared on social media (Facebook, WhatsApp and Twitter) to motivate friends and acquaintances to play. The campaign was developed for 11 countries and this allows the options of the game to be individually configured according to each region.

“We worked closely with marine biologists and WWF experts on the project in order to present the various stages of fish production and their effects, as realistically as possible. This makes the campaign particularly clear on the environmental impact of individual consumer behaviour,” says Diego del Pozo, Managing Director of TUNNEL23.

“With the Europe-wide multi-channel campaign, the WWF is creating broad awareness of the ecological footprint of fish consumption. The implementation of TUNNEL23 has been particularly successful because it conveys this important information in a playful way and thus motivates users to take a closer look at the topic,” says Andrzej Jurczak, project coordinator of WWF Austria.

The campaign is part of the Fish Forward project which is co-funded by the European Union.

TUNNEL23 was founded in 2001 as an owner-managed agency and is now one of the most award-winning creative agencies for digital media in Austria. The 25-strong team creates online and mobile communication campaigns from conception to design and implementation – a combination of innovation and creativity at the cutting edge of technology.

Find out more or adjust your settings.

Strictly Necessary Cookie should be enabled at all times so that we can save your preferences for cookie settings.

This website uses Google Analytics to collect anonymous information such as the number of visitors to the site, and the most popular pages.