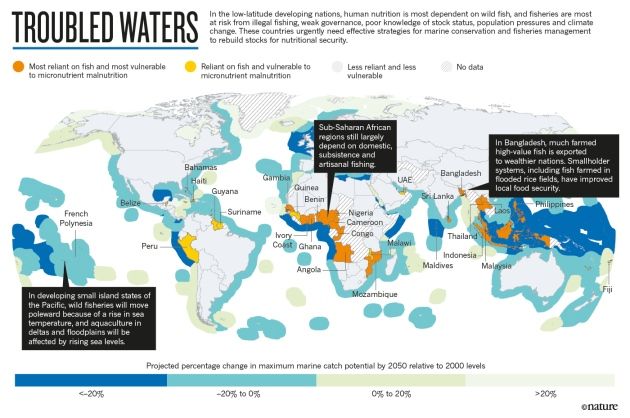 How will the 10 billion people expected to be living on Earth by 2050 obtain sufficient and nutritious food? This is one of the greatest challenges humanity faces. Global food systems must supply enough calories and protein for a growing human population and provide important micronutrients such as iron, zinc, omega-3 fatty acids and vitamins.

Deficiencies of micronutrients — so called because the body needs them only in tiny amounts — can increase the risks of perinatal and maternal mortality, growth retardation, child mortality, cognitive deficits and reduced immune function1. The associated burdens of disease are large. Forty-five per cent of mortality in children under five is attributable to undernutrition; nutritional deficiencies are responsible for 50% of years lived with disability in children aged four and under.

ish are crucial sources of micronutrients, often in highly bioavailable forms. And fish populations are declining. Most previous analyses have considered only how people will be affected by the loss of protein derived from fish. We calculate that this is the tip of the iceberg. Combining data on dietary nutrition, and fish catch, we predict that more than 10% of the global population could face micronutrient and fatty-acid deficiencies driven by fish declines over the coming decades, especially in the developing nations at the Equator (see ‘Troubled Waters’). This new view underlines the need for nutrition-sensitive fisheries policies.