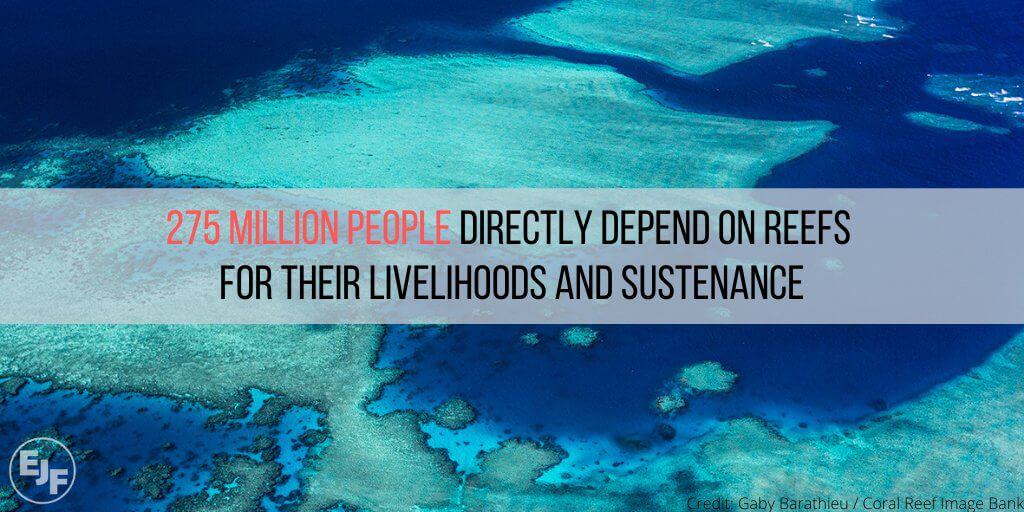 The risk of severe impacts on coastal communities and marine biodiversity from the loss of coral reefs is highlighted in a new report by EJF. 275 million people directly depend on reefs for their livelihoods and sustenance, but the IPCC predicts that 99% of corals will be lost under 2°C of global heating. Pollution and unsustainable fishing present further threats.

A combination of immediate action on greenhouse gas emissions, an end to destructive fishing practices and effective protection for 30% of the world’s oceans is urgently needed, says EJF.

Coral reefs are one of the richest ecosystems on the planet, supporting an estimated quarter of all marine species and rivalling rainforests in terms of diversity of wildlife. They provide vital nutrition and storm protection for coastal communities, as well as supporting livelihoods in fishing and tourism industries.

As the climate crisis intensifies, the delicate balance of conditions necessary for reefs to function is altered, leading to potentially irreversible damage. For instance, in 2016 alone the Great Barrier reef lost 30% of its coral to bleaching.

Six million small-scale fishers currently fish on reefs, providing crucial protein and income for island and coastal communities. In many of these places there is little scope to adapt to reef loss in terms of alternative food sources and economic opportunities, says the report.

The loss of functions from coral reefs compounds the vulnerabilities of those who are already greatly exposed to climate change impacts, in particular the populations of small island developing states.

The economic impact of flood and storm damages incurred by the loss of coral reefs is also significant. Coral reefs can absorb 70-90% of wave energy, forming a natural protective barrier. With a loss of only one metre in reef height, annual financial damages from flooding would double and damages from storms would triple. Over a period of just 100 years, the cost of flood damage would increase by 91%.

Tourism will suffer too, a crucial part of the economy for many small countries with reefs. A single hammerhead shark can generate up to US$1.6 million throughout its life from eco-tourism revenue, research in Costa Rica has shown. Worldwide, reef tourism is estimated to be worth US$9.6 billion.

However, the significance of the loss of wildlife and biodiversity goes beyond tourism, the report emphasises. Reef biodiversity provides resilience in the face of changing conditions. Over and above fishing and tourism, these species have also been the source of vital medicines used to treat cancer, Alzheimer’s and bacterial infections, among many other conditions. The significance of coral reefs and their services for future generations is unknown and may never be realised.

But there are simple, cost effective and politically deliverable solutions available to us right now.

Urgent action in line with the Paris Agreement to restrict temperature rise to 1.5°C is the first vital step, says the report. A full transition to zero carbon by all major industrialised economies is needed by 2030, ensuring a reliable supply of truly renewable energy.

Marine Protected Areas need effective management and enforcement, and ideally should form networks to cover at least 30% of ecologically representative regions of our seas and oceans.

The world’s coral reefs are not only a vital source of food and income for millions of people. They are home to a vast diversity of irreplaceable wildlife. Failure to act now to protect them will cause environmental ruin and with it a human tragedy.