Fish Dependence Day: Europe relies on imports for the rest of the year 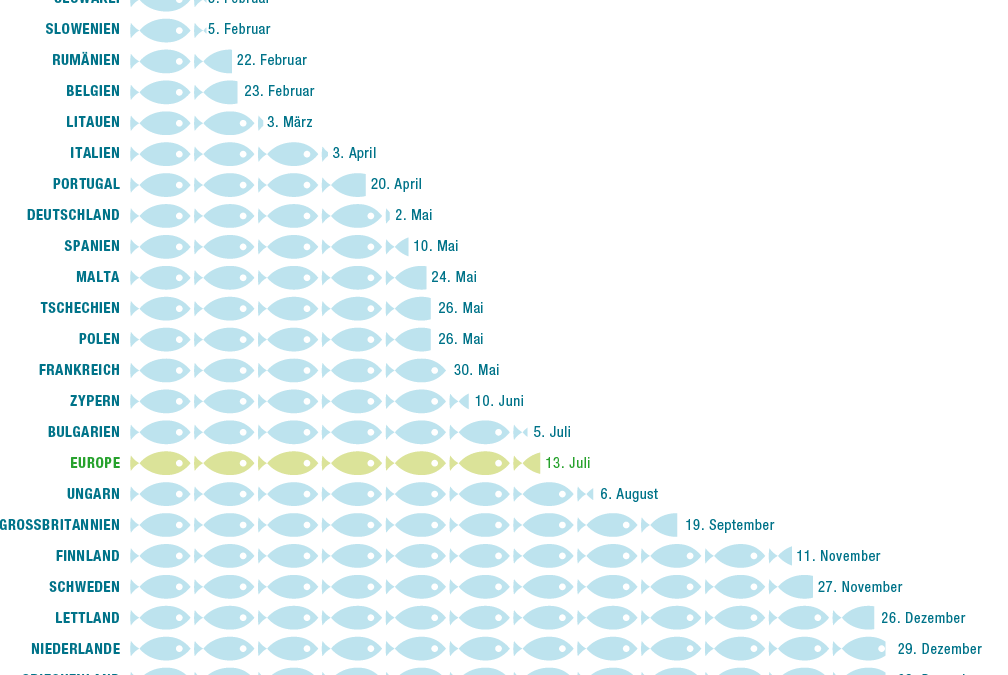 As of today, Europe relies on fish and seafood imports for the rest of the year in order to meet consumption demand. Europe consumes far more seafood than it can catch in its domestic waters. More than half of the yearly demand comes from foreign waters, of which around 50 percent comes from developing countries.

According to FAO statistics, with an average fish consumption of 7.6 kg per capita per year, Austria ranks 24th in Europe. Portugal (56.8 kg), Lithuania (43.4 kg), Spain (42.4 kg), Finland (35.6 kg) and France (34.6 kg) have the highest per capita consumption rates in the EU. Together, these five countries alone account for about a third of EU fish consumption. On average, each European citizen consumes 23 kg of seafood products per year.

For seven years, the New Economics Foundation (NEF) has been calculating levels of seafood dependence of the EU and each of its member states every year. Countries producing as much or more than they consume are considered autonomous (e.g. Denmark, Estonia, Ireland). Most countries depend on fish imports to maintain their level of consumption, though. July 13 marks Europe’s Fish Dependence Day, expressing that the continent used up all of its domestic fish supply. The following countries have the highest dependence on seafood products from foreign waters and respectively earlier Fish Dependence Days: Austria (January 19), Slovenia and Slovakia (February 5), Romania (February 22), Belgium (February 23), Lithuania (March 3), Italy (April 3), Portugal (April 20), Germany (May 2), Spain (May 10), etc.

“In less than a month, Austria has already consumed the equivalent of all its yearly domestic fish resources. We heavily depend on fish imports, especially from developing countries. Therefore, authorities, corporates and consumers bear great responsibility in dealing sustainably and responsibly with global marine resources. We have to be aware of the impact on communities in developing countries depending on fish as a source of food and income,” says Simone Niedermüller, marine expert at WWF.

Over the past three decades, the European Fish Dependence Day inexorably occurred earlier each year. Thirty years ago, Europe could meet its demand with fish from domestic waters until September or October.  Throughout the same period of time, the global problem of overfishing has increased, leaving more than 30 percent of fish stocks overfished and further almost 60 percent fished to capacity, and illegal, underreported and unregulated fishing amplifying the pressure on global stocks.

Although some European fish stocks have stabilized – thanks to certain measures taken in the context of the EU Common Fisheries Policy – there are still, according to the European Commission, currently 48 percent of assessed fish stocks in the Atlantic that are overfished, a figure that rises to 93 percent in the Mediterranean. Overfishing in the Mediterranean Sea has reached a critical point. It is foreseeable that the trend will continue if the right measures are not taken. Overfishing also impacts fish stocks in developing countries, which highly depend on these valuable resources.

In order to raise awareness among consumers, WWF launched the Fish Forward project, informing about the social and environmental impacts of seafood consumption and recommending the purchase of sustainable fish: “Whether domestic or imported seafood products, consumers should always go for the sustainable choice. This helps oceans and fish stocks to recover and supports livelihoods of people around the globe who depend on fish as a source of food and income”, says Niedermüller.