The roles of women must be reinforced in EU marine policies 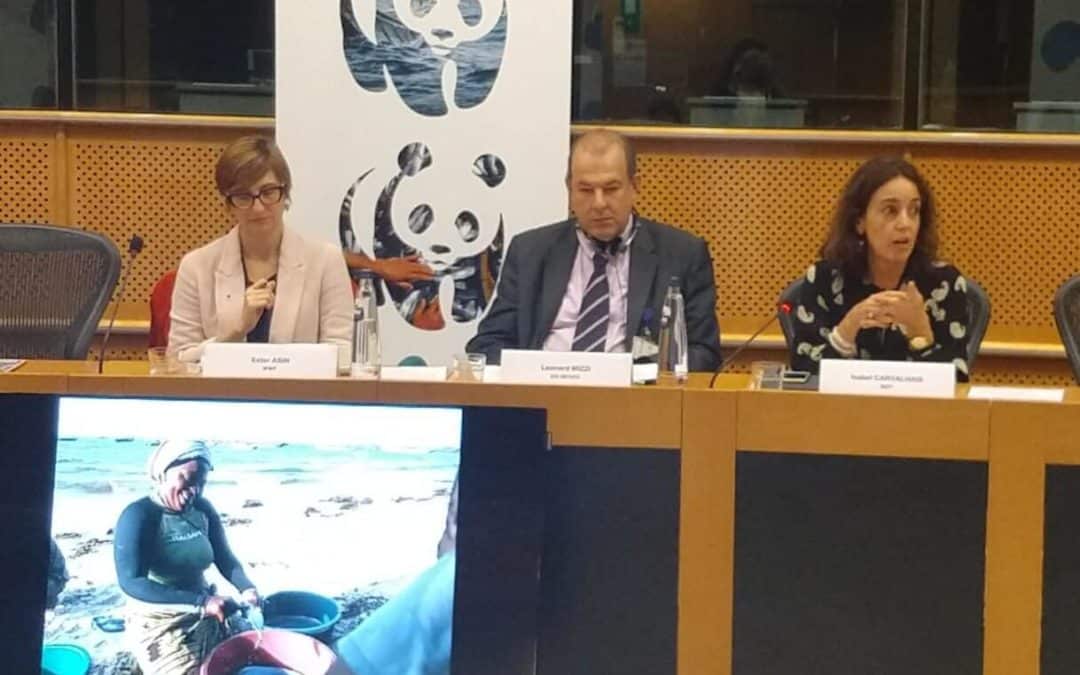 On this year’s World Maritime Day, whose theme was “Empowering Women in the Maritime Community”, the WWF European Policy Office (EPO) launched a new policy brief directed to EU decision makers, but whose messages are relevant for leaders worldwide.

The publication stresses the importance of gender equality and the role of women being embedded in all conservation and development policies to ensure food security and deliver sustainable seafood at a global scale in the face of the climate crisis. Women play a key role in ensuring food security and sustainability of the global seafood sector, yet the knowledge, skills and decision-making tactics of both women and men are currently absent from discourse on natural resource management and adaptation to climate change.

Via an assessment of previous studies and publicly available data, the brief shows that while 80-90% of the workforce in the global seafood processing industry and 70% of the aquaculture processing workforce is female, these positions exemplify gender disparity as they are mainly low-skilled, low-paid and low-valued jobs. In Europe, nearly 1/4 of the aquaculture workforce is female; this sector’s production was predicted to double between 2014 and 2030, and thus female representation will grow as well – their voices can no longer be left out of policy discourse for achieving sustainable seafood production to meet the growing demand.

WWF calls on decision makers to embed gender equality in all development and conservation policies. This will empower women to effectively fulfil their roles as environmental stewards whilst simultaneously addressing climate change and the interconnected social challenges we face as a global society. Key recommendations include:
• Mandate gender-balanced participation in all seafood and fisheries-related management activities.
• Make women in the seafood sector visible at all levels by acknowledging the role that both genders play throughout the entire seafood production chain, together with their respective contributions to increased social and environmental sustainability.
• Ensure gender screening of all policies and programmes related to the seafood sector.
• Promote the involvement of women in science and increase research on gender equality in the seafood sector, as the current lack of available data is significant.

An event to launch the brief took place at the European Parliament on World Maritime Day, with a high-level discussion between decision makers, industry representatives and WWF. The following is a summary of each participant’s views presented during the event’s discussions:

Member of European Parliament (MEP) Isabel Carvalhais who is part of the European Parliament committees for Agriculture & Rural Development, as well as Fisheries, set the foundation for the discussion, reminding all participants that climate change has reached such a level of urgency that no one can afford to ignore it, and that the invisibility of women in seafood and fisheries must be overcome, as their work is crucial. She pledged her commitment to improving the visibility of women in the industry.

MEP Chris Davies who is Chair of the European Parliament Fisheries Committee shared his view that the fishing industry could be one of the success stories, despite global warming, but that hard decision would need to be taken, with sustainability at the core.

The event was delighted to welcome Celia Rodrigues, a Portuguese oyster farm manager, who presented her experiences with sustainable seafood from her career spanning over 20 years. While she can see the investment being made into Portugal and Europe’s blue economy and the effort for sustainable activities, she called for EU leadership to deliver better policies to protect for marine resources that in turn link to sustainable economies, rather than focusing on economic policies alone.

WWF EPO Director, Ester Asin, brought perspective on the wider scale implications of the climate crisis, including how developing countries facing 50% reductions in fisheries production, that we face the potential loss of 70% of Earths’ coral reefs if we do not reduce our emissions, and that the 40% of EU population living in coastal areas will face the very real impacts of rising sea levels very soon. The roles, knowledge and voices of women from the seafood industry are crucial to elevate if we hope to address loss of fish populations in a warming ocean. She called for the knowledge gap we’re currently facing on gender disparity in seafood to be closed and for binding principles in policies to ensure that all stakeholders’ voices are heard at the decision making table.

Leonard Mizzi, Head of DG DevCo Unit on Rural development, food security and nutrition spoke about the important role in the sea food industry all over the world, especially in developing countries, and expressed his concern about the lack of exact gender specific data, particularly in light of how much more impacted by climate change this group is. He stressed that when we empower women in this industry, it will have a positive effect for all coastal communities and called for the EU to focus on three pillars going forward: more research, how to diversify diets, more inclusive value chains across the private sectors.

Finally, Elisa Roller, Head of the EU Common Fisheries Policy Support Unit at the EU Commission cited that EUR 20 million in EU maritime and fisheries funding has already been committed to developing women-focused projects, and that over one-quarter of the entire fund goes towards women overall. This by no means there isn’t more work to do, and stressed that women need to be seen as active participants in every aspect of this field: from small scale fisheries to CEOs of large companies in the seafood industry. She also called for co-legislators to aim higher in new legislation and regulations to ensure the role of women is always taken on board, as it currently isn’t.